Say Hello to Jolly – she is around 7 months old, and had a poor start to life as many rabbits do, but she was taken in to our care and is now looking forward to her new life as a housebunny with her new family and husbun very soon. We always advocate neutering male and female bunnies for health and behavioural reasons and because they must be neutered to live together in harmony. We often quote the figure of 80% of female rabbits developing uterine cancer before they are 4 years old if they are not speyed. Jolly was also developing common hormonal aggression behaviours, such as attacking anything that entered her territory, even food! So, she was spayed last week and it was no surprise to us to hear that she already had 3 cysts. The wonderful Orlaith at Ani Medics in Taunton had this to say: “‘Jolly came in to be spayed, and even though she was still young at 7 months she had already developed signs of biting. We always advise to neuter from 4 months on. Unneutered rabbits have up to an 80% chance of developing uterine cancer in later years and also risk pyometra which is a nasty infection of the uterus. Furthermore unspayed females become aggressive and territorial. Little Jolly had developed two cysts on her right ovary and one on her left. This was probably contributing to her sudden change in behaviour. Now that these are removed hopefully she will return to being a happy hopper! Other risks associated with a rabbit that is not neutered include false pregnancy, ovarian tumours, uterine aneurysm (blood filled uterus) and of course unwanted pregnancy. Jolly was very happy to go home eating all her favourite hay and some tasty dandelions. ” So – please remember to neuter your rabbits – and please share to make others aware – thank you 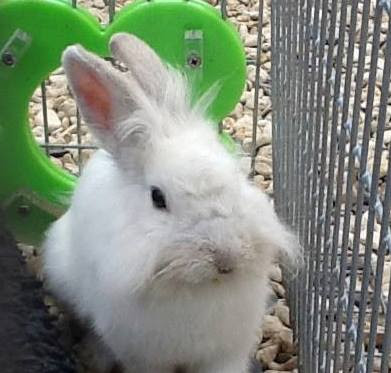